Its official…summer is here! If you haven’t noticed by the heat, summer officially started last month and time to adjust your fishing techniques. The key is to fish early and be off the water by midday or fish late and be careful of our afternoon storms. Tarpon have held the headlines the last couple of months and will begin to slow down, but you may still have a chance for a late season tarpon in our region. If you are looking for some groceries, mangrove snapper will be willing to join you for dinner. The trusty spanish mackerel will be willing to keep rods bent. Sharks will also be willing to play in the same areas with the mackerel and snapper. 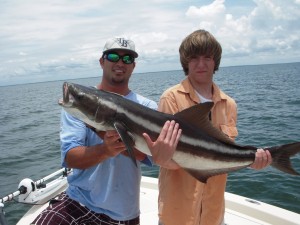 The shark fishing in our region is often overlooked but can be very productive, and with temperatures reaching 90, it’s time to think outside the box and target a species that isn’t affected by the heat. Look for sharks in the same areas you target spainsh mackerel. Most artificial reefs, ship channel, and the Skyway Bridge will hold sharks. Heavy conventional or spinning gear is a must. I prefer to use 100lb Ohero fluorocarbon leader, but if I start to get a few cut offs, I’ll switch to steel leader. A 7/0 Daiichi circle hook is strong and will hold up to most fish. As far as bait, almost any species will work, but I prefer spanish mackerel.

The trout bite should continue to be strong. The key is to get out early and when temperatures heat up, move to deeper water. With bait being an issue in our region all year, now is a good time to try your skills with artificials. It’s hard to beat the fun and exciting action of top water early. Zara Super Spook in a bone color is one of my favorite baits. As water temperatures warm, move to deeper waters and change to a soft plastic. I prefer a Gulp! jerk shad in the nuclear chicken color rigged weedless with a 4/0 Daiichi Butt Dragger weighted hook.

We should see a good push of mangrove snapper start to school up inside our region this month. With the summer spawn in full swing; look for these tasty critters to be willing to play. A 3/8 ounce jig head or a knocker rig should do the trick to get your baits down. 30lb Ohero Fluorocarbon leader should work, but be willing to beef up if you lose some fish. A 1/0 Daiichi circle hook will work great. The small newly hatched scaled sardines will be the bait of choice. A 1/4” mesh cast net will be a must for the small baits. Make sure to net plenty of bait to use as chum. Chum the snapper up off the structure to make for an easier catch.

Best of the Rest

Although most migrating fish will be pushing off, you still have an opportunity for some late season action. Our resident fish will be moving around and staging in areas in our region. The FWC has ruled to keep snook season closed until August 2012, but there is still some good catch and release action to be had. Areas around Apollo Beach to Downtown will be holding some good snook action. Remember every fish is important to the rebuild of the population so handle each fish with extreme care.

We use cookies on our website to give you the most relevant experience by remembering your preferences and repeat visits. By clicking “Accept All”, you consent to the use of ALL the cookies. However, you may visit "Cookie Settings" to provide a controlled consent.
Cookie SettingsAccept All
Manage consent

This website uses cookies to improve your experience while you navigate through the website. Out of these cookies, the cookies that are categorized as necessary are stored on your browser as they are essential for the working of basic functionalities of the website. We also use third-party cookies that help us analyze and understand how you use this website. These cookies will be stored in your browser only with your consent. You also have the option to opt-out of these cookies. But opting out of some of these cookies may have an effect on your browsing experience.
Necessary Always Enabled
Necessary cookies are absolutely essential for the website to function properly. This category only includes cookies that ensures basic functionalities and security features of the website. These cookies do not store any personal information.
Non-necessary
Any cookies that may not be particularly necessary for the website to function and is used specifically to collect user personal data via analytics, ads, other embedded contents are termed as non-necessary cookies. It is mandatory to procure user consent prior to running these cookies on your website.
SAVE & ACCEPT
Scroll to Top